Little work has been done to date on critical approaches to the dominant discourses of postcolonial Western Society, shaped by a colonial heritage which is frequently described as Christian. Therefore this colloquium focuses on issues of translation and particularly the translation of texts, practices and concepts identified as Christian, from one language and (sub)culture into another, reflecting an interest in translation both in its linguistic and in its socio-cultural sense. Colleagues are invited to present work which can comprise a varied range of discourse types and styles, such as written texts, dramatic and ritual performances, visual representations and oral traditions. The principal objective is to discuss multiple perspectives and methodological approaches (religious studies, history, languages studies & linguistics, anthropology, literary and gender studies, translation studies) in addressing the issue of how cultural contents such as religious canons, beliefs and/or practices found in mainstream, dominant or elite sectors of society both change and are changed in the process of translation into minority, marginalised or subaltern con(-)texts. 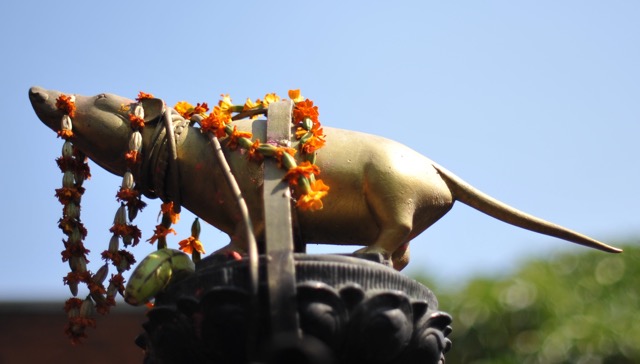 image courtesy of Will Tuladhar-Douglas

Shrew or Rat?
How ethnobiology reveals
a god hidden in plain sight

While ethnobiology and religious studies might seem to have little to do with each other, I will show that the use of research methods from ethnobiology—and Indology, anthropology, and history of art—reveal a wholly unknown deity with a distinct cult and history in one of the most intensively studied sites in Asia, Kathmandu. Further, the social anthropology of this deity exposes an indigenous critique of the state religion used to control Newar society.

Dr Michael Marten has been interviewed by Caitlin Smith for a BBC documentary, picking up on his research on Scottish missions in Palestine.

The presenter is Angus Roxburgh. The programme examines the hotel in Tiberias owned and run by the Church of Scotland, critically addressing current Church policies in the light of historical circumstances. The conversion from a guest house to a luxury hotel has long been a controversial issue in the wider Church, as this 2004 BBC article indicates.

We will post an iPlayer link if we become aware of one.

August 2012 ‘What is the point of… universities?’ Andrew Hass on BBC radio

Dr Andrew Hass was recently interviewed for BBC Radio 4’s ‘What is the point of…’ programme, looking at universities. The programme was first broadcast on 15.8.12, and is also available on the BBC website (this link may not work if you are not in the UK).

His blog entries on the nature of the university initially drew the programme makers’ attention to Dr Hass’ views: What is a University for? and The Role of the University Amplified.

In the context of the Edinburgh Festival of Spirituality and Peace, a Conversation on the topic of ‘Disorganised Religion’ is taking place on 9. August. The speakers include one of our Critical Religion colleagues, Michael Marten, along with Ian Milligan from Exploring Anabaptism in Scotland and the Bert community in Glasgow. The event is chaired by Simon Barrow from our partner organisation, Ekklesia.

We live in an era where people are inquisitive about spirituality, but hugely distrustful or even hostile towards ‘organised religion’, especially in its Christian forms.

But there are strong anti-institutional and non-hierarchical traditions in Christianity and beyond.

Can Anabaptists, Quakers, Nonconformists and loyal dissenters from within the major streams of Christianity offer a new vision of faith and an alternative to top-down religion?

Join the ‘vast minority’ at the Festival of Spirituality and Peace in Edinburgh to discuss what a radical reformation in the Church has to offer – and how this relates to the wider demography of religious and belief-based change in a globalising world.

This Conversation is organised in partnership with the Iona Community and Ekklesia.

Tickets are available from The Hub. Ekklesia has much more on the Festival of Spirituality and Peace at this link: http://www.ekklesia.co.uk/festivalofspirituality. 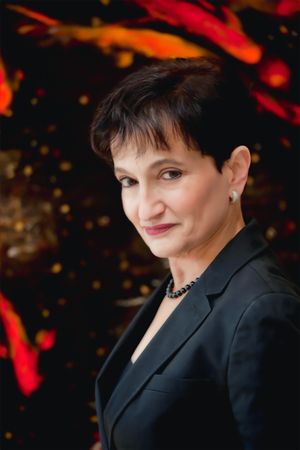 On behalf of the department of Languages and Literatures, the Critical Religion Research Group is delighted to be welcoming Seija Jalagin, University of Oulu, to the University of Stirling.

Dr Jalagin is Senior Lecturer in General History and Japanese Studies, having published widely on the study of Finnish missions to Japan. She continues to work on Japan, and is also now pursuing the study of Finnish missions to Jews in Jerusalem. She is one of the co-editors of the CLIOH-World research project’s book World and Global History – Research and Teaching, available as a download here.

She will be speaking on 16. April at 15:00 in Pathfoot E26, on ‘A Transnational Love-story: Contesting Gender and Ethnicity in Finnish Mission to Early 20th-Century Japan’ – all Stirling staff and postgraduate students are most welcome. Enquiries should be directed to Michael Marten in the first instance.

The Critical Religion Research Group is delighted to be hosting Naomi Goldenberg, Professor of Religious Studies (Department of Classics and Religious Studies, University of Ottawa), for a visit to the UK in April 2012.

Prof. Goldenberg will be speaking in three locations: Stirling, Aberdeen and London. Details for each location are noted below, as are some notes about her current research. The Critical Religion Research Group is also happy to facilitate media enquiries regarding Prof. Goldenberg’s visit (press release available here). Unless otherwise noted, all general enquiries should be directed to Dr Tim Fitzgerald.

In advance of her visit, Prof. Goldenberg has also written guest blog entries that discuss her work.

Please distribute information about these events widely (share buttons are at the bottom of this page).

“What’s God Got to Do With It? Contemporary Statecraft, Gender and the Category of Religion”

Room B2, Pathfoot Building, University of Stirling, at 15:00.

Prof. Goldenberg is speaking at a day workshop entitled Modernity and the Category of Religion, organised by Dr Trevor Stack of Aberdeen University’s Centre for Citizenship, Civil Society and Rule of Law.

“What’s God Got to Do With It? Feminism, Religion and the State”

Posters for this event can be sent on request, and are available for download here in jpg format: A3 size, A4 size.

The London event is organised in conjunction with our partner, Ekklesia.

I will argue that religions function as vestigial states within contemporary nation-states. By ‘vestigial states’ I mean sets of institutions and practices that originate in particular histories with reference to former sovereignties within present governmental jurisdictions. Vestigial states are both tolerated and encouraged as attenuated and marginalized governments within fully functioning nation states. However, they compete with contemporary nation states and therefore are always problematic in varying degrees – especially if a vestigial state challenges the exclusive right of the present state to control violence. Indeed, vestigial states have a propensity to behave as once and future states. Nevertheless, although vestigial states can contest contemporary governments, they also work to ground the powers that authorize them by recalling earlier, now mystified forms of sovereignty from which present states arise. They are thus storehouses of nostalgia for fictional, beneficent male hegemonies that present states are thought of as representing in less magical (i.e. ‘secular’) incarnations.

Because vestigial states always embody and perform patriarchal power through citing former male-dominated governments, they support the notion that the only truly legitimate political authority is male. Although women can exercise some authority in contemporary nation states, this power is so novel that it lacks cultural roots and social gravitas. Rights and responsibilities tend to be provisional, partial, and subject to restriction. In order for recent, progressive feminist gains worldwide to be both secured and furthered, the role of vestigial states – i.e. religions – in the maintenance of male control of contemporary nation states must be more vigorously interrogated.

Prof. Goldenberg is very happy to conduct media interviews during her time in the UK. A press release with more details is here. All enquiries should be directed in the first instance to Dr Michael Marten on 01786 46 75 32.

The first event by the Critical Religion Research Group was a day conference organised for potential postgraduate students on 2. March 2011. 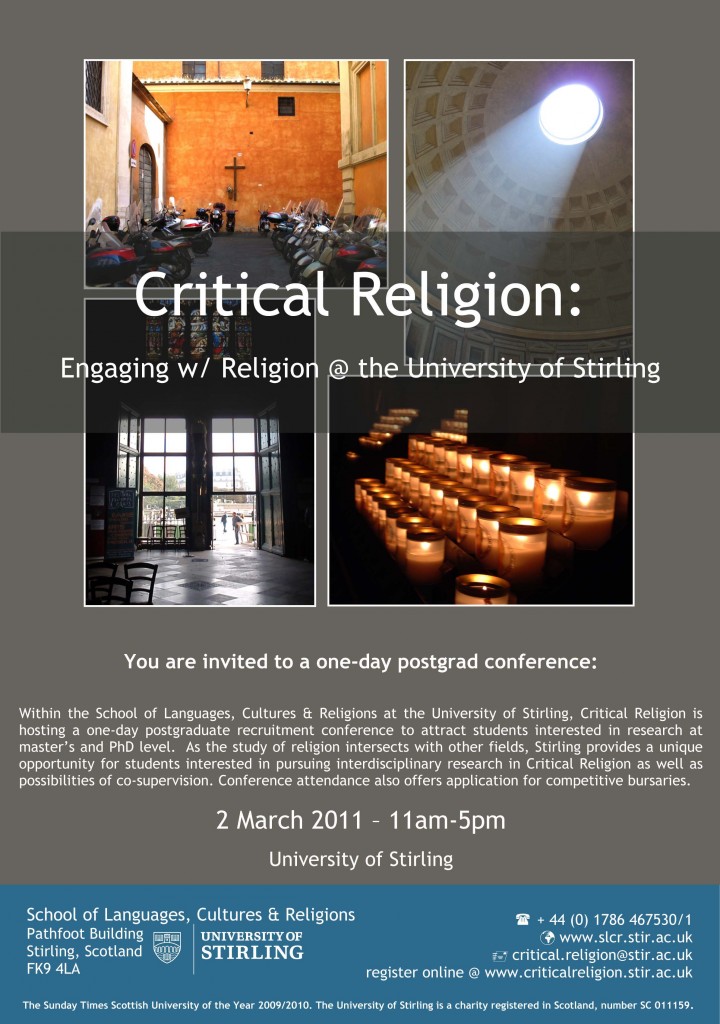