My research in the field of Religion centres on the Andean region in South America, above all the time of the Spanish conquest and colonial era. As the Spanish decided very soon after the conquest that it would be best to catechise the indigenous peoples in their own languages, there is a large corpus of  linguistic and textual data, mostly produced by Christian priests, but also some by indigenous authors.

Topics I am particularly interested in are, for example, the transmission of Christian concepts into Amerindian languages and the reception by the indigenous population. Apart from a knowledge of the Amerindian languages (I focus on Quechua), it is necessary to analyse data from a range of disiplines, e.g. linguistics, ethnohistory and religious studies.

Questions I address in my work focus on the mutual influences and fusions of European and Andean beliefs and practices in a colonial setting. Thereby I hope to contribute to a better understanding of the processes of colonialisation, the interactions between colonisers and colonised, the problematics of studying the origin of ‘mixed’ beliefs and practices, and the influence such ‘hybrid’ developments have had on contemporary religion.

Co-founder of the research group Translating Christianities at the University of Stirling.

Personal project: The power of the word: Christianising the Indian in colonial and early post-colonial Peru – Based on a collection of anonymous and mainly undated manuscripts held in the British Library it will be examined under which cultural and political circumstances Quechua language and discourse was used to convert the indigenous population to Christianity.

Collaborative project (with colleagues from the UK, the Netherlands, Spain, Mexico and Brazil) (planning stage): Confessionaries: Questions as answers about the colonial Church and indigenous people – Interdisciplinary comparative study of Iberian and colonial confessionaries from the 15th to the 18th century about language, identity and the other. 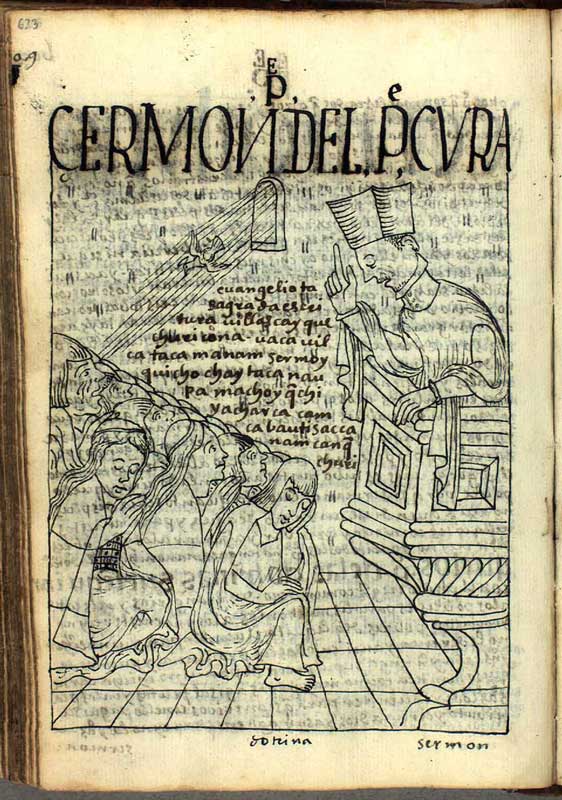 Teaching Christianity to the Indians of Peru in the 17th century (http://www.kb.dk/permalink/2006/poma/info/en/frontpage.htm; page 623); click for a larger version.

Some of these topics are addressed in my undergraduate teaching programme, such as an overview of Andean Religion in the Religion first year module (RELU912), an Option module on ‘Andean Myths’ (SPAU9AM) open to Spanish & Latin American Studies and Religion Honours students, and a joint Option module in Religion (originally created by Michael Marten), on ‘Christian Missions and Colonialism’ (RELU9MC). Further topics of the language of conversion are addressed in my contribution to a postgraduate module on Cultural Translation and Transfer (CTTP02).

I welcome enquiries particularly in areas which interrelate two or more of the following fields: Amerindian Studies, ethnohistory, indigenous religions and mission, hybridity and syncretism, indigenous languages of the Andes – you can contact me directly using the form below.

To see my site on religion in the Andes, go to: www.dedenbachsalazar.stir.ac.uk.